Fibromyalgia is a chronic disease characterised by severe muscular pain, tiredness, stiffness and achy sensations, often sufferers can initially feel it is all in their heads because of the lack of concrete diagnosis. Fibromyalgia is thought to affect the person’s pain receptors and altering their pain threshold. Research is indicating that a decrease in energy production may be causing the pain as opposed to inflammation.  About 1-2% of the population suffers from fibromyalgia and it predominantly occurs in women 90% and is usually diagnosed between the ages of 30-50 years of age.

While there is no cure for fibromyalgia, it is not progressive instead the symptoms have to be managed and in some cases, the symptoms can be reduced. The exact cause of fibromyalgia is unknown but various theories including genetics, links to physical or emotional trauma, auto-immune diseases, rheumatoid arthritis, ankylosing spondylitis and lupus have been identified as potential causes.

The journey towards diagnosing Fibromyalgia is often a time consuming, exhausting process as there are no specific tests to help identify.   In the beginning, fibromyalgia can be misdiagnosed as the symptoms can be similar to diseases such as M.E, rheumatoid arthritis and multiple sclerosis.  Fibromyalgia is usually diagnosed after extensive tests rule out other causes of pain and tiredness.  It is identified by a collective group of symptoms being present for 3 months including pain and fatigue along with the presence of tenderness on at least 11 of the 18 trigger points can be used to diagnosis Fibromyalgia.   Locations of the trigger points include around the elbows, knees, neck, shoulders and hips. 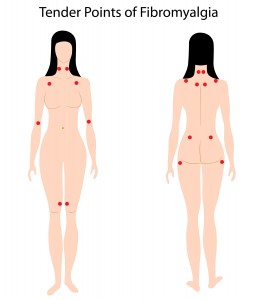 Someone with fibromyalgia can experience:

Sleep disturbances are common for someone with fibromyalgia but it is not clear if sleep problems trigger fibromyalgia or if the sleep difficulties are a side effect.

Prone to stiffness in the morning

Fibromyalgia can be one of those frustrating syndromes that can be difficult to treat from a conventional medicine perspective.  Usually, anti-inflammatories, pain management, low doses of anti-depressants and sleep aids can be used to manage the pain and symptoms but often resulting in the person experiencing side effects such as constipation, drowsiness and weight gain.    Regular exercise, dietary supplementation including additional magnesium,  cognitive behavioural therapy and acupuncture are some of the suggest supports for managing fibromyalgia.

What can acupuncture do?

In 2005, the Mayo clinic did a small study whereby 50 people with mild to severe fibromyalgia symptoms were treated with acupuncture over a course of 2-3 weeks.  The patient’s filled in questionnaires pre and post treatment, patient’s report improvement in pain, anxiety and fatigue in the month after the treatment.  The effects weren’t long lasting and affect 7 months the symptoms had returned to pre- treatment levels.  It is suggested that Acupuncture can be used as part of an overall plan to manage the symptoms of acupuncture.

From a T.C.M point of view, Fibromyalgia falls under the number of areas such as weakness in the liver, kidneys, heart and spleen.  A diagnosis is generally made by completing a full assessment of the condition and identifying the underlying weaknesses.   Dietary changes, exercise and changing certain lifestyle habits may also be suggested.

Disclaimer: The information contained on this site is intended for information purposes only and is not a substitute for advice, diagnosis or treatment by a medical practitioner. It is not meant to cover all possible precautions, drug interactions, circumstances or adverse effects. You should seek prompt medical care for any health issues and consult your doctor before using alternative medicine.

This site uses Akismet to reduce spam. Learn how your comment data is processed.